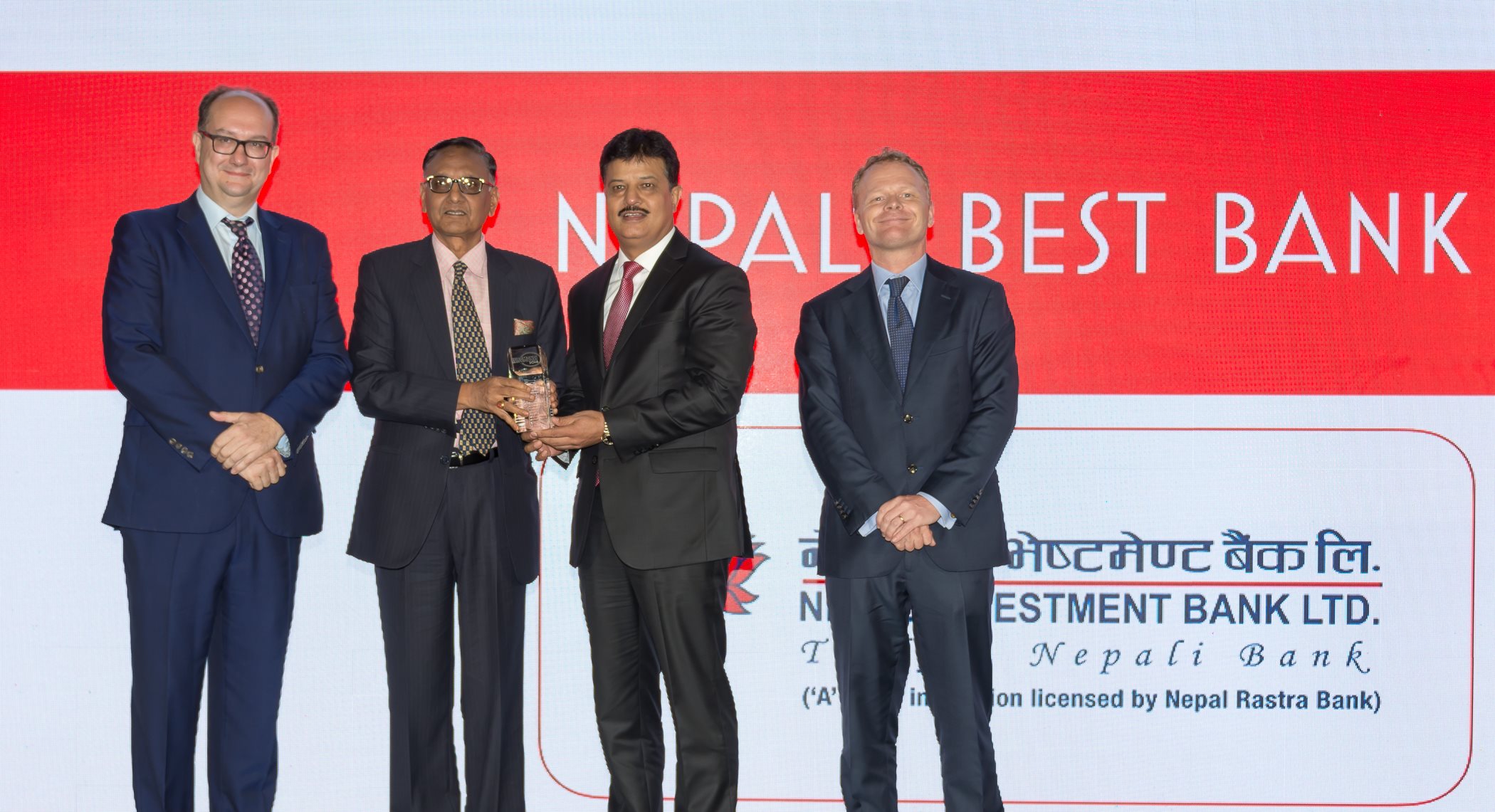 Nepal Investment Bank Limited (NIBL) has won Nepal’s Best Bank award from Euromoney magazine’s Awards for Excellence 2018, one of the most significant awards in financial services.

Euromoney awards evaluate levels of service, financial performance and other achievements across the banking industry. This year, the Euromoney team received almost 1,500 submissions from banks around the world competing for global, regional and national titles.

Bhuwaneshwar Prasad Shah, Director of NIBL, received the award on behalf of NIBL amidst a special award gala organized in Hong Kong. The award ceremony was attended by almost 500 leading bankers from around the world.

This award is a very fulfilling testimonial of NIBL’s strategic achievements.

Nepal Investment Bank Ltd. (NIBL), established in 1986, is one of the most trusted and popular banks in the country. The bank has more than 870,000 customer base catered from its 77 branches and seven extension counters across the nation. The bank has a network of 104 ATMs and leads a consortium 14 Visa Associate banks and seven NPN member banks. There are almost 1.5 million cards issued by its network, along with 790 ATMs and 2,597 POS terminals.

It also has 57 branchless banking counters across remote parts of Nepal. The bank disbursed Rs3.7 billion micro-credit loans to the deprived sector that has helped in the sustainable development of rural communities.

NIBL is the only bank in the country to have received the “Bank of Year Award” five times in 2003, 2005, 2008, 2010 and 2016 from the Financial Times Group’s The Banker, a UK based Bank magazine, and has received a credit rating [ICRANP-IR] A+ from ICRA Nepal (International Credit Rating Agency- Nepal).

NIBL is the first bank to partner with Khalti. You can load funds to Khalti via NIBL eBanking service , mobile (SMS) banking or cash deposit Khalti vouchers available at the branches of NIBL all over Nepal.

About Euromoney Awards for Excellence

For almost 50 years, Euromoney has been the leading publication for covering the growth of international finance. Over the past 12 months, its coverage has included interviews with close to 100 bank CEOs, ministers of finance and central bank governors around the world.

Euromoney’s Awards for Excellence are the awards that matter to the banks and bankers who matter. They were established in 1992 and were the first of their kind in the global banking industry. This year Euromoney received almost 1,500 submissions from banks in an awards program that covers 20 global awards, more than 50 regional awards, and best bank awards in close to 100 countries.

You can load your Khalti account using NIBL eBanking in these 6 simple steps:

1. Sign up & login to Khalti via our mobile apps or web dashboard khalti.com

3. Select ‘NIBL’ from the list & input the amount you want to load and tap ‘LOAD FUND’

4. eBanking portal of NIBL will load. Log in to your NIBL eBanking account and tap on ‘Make Payment’

5. Tap on ‘Generate OTP’, Enter the OTP sent to you via SMS or email, enter your Transaction Password and Tap on ‘Confirm’

Your Khalti wallet will be loaded instantly

Watch this video on how to load fund in Khalti via NIBL mobile banking:

Khalti congratulates NIBL for being honored as Nepal’s Best Bank 2018 by Euromoney Awards for Excellence!

Dr. Vivek Bindra coming to Nepal: Get ready for Bounce Back Series that will change your professiona...
Khalti brings Big Movies tickets offer to you this Tihar
Khalti brings wallet to bank money transfer facility; how to cashout money/withdraw cash from Khalti...
Access to Finance in Nepal is on the Rise