How to buy tickets for LIVE Show of Ko Banchha Crorepati from Khalti app? 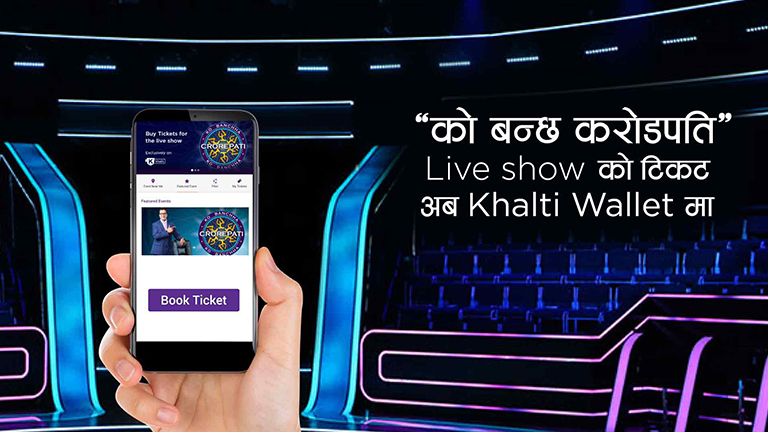 The show is hosted by none other than Rajesh Hamal, the megastar of the Nepali film industry. Coca-Cola is the title sponsor of the show. In its format, contestants tackle a series of multiple-choice questions to win a large cash prize of up to 1 crore Nepali rupees. This entire season will consist of 52 episodes.

Khalti is the exclusive ticketing partner for the show. To attend the filming of the much-awaited reality TV show, you can buy a ticket from Khalti.

Seating arrangements will be done as per the ticket price. By attending the filming of the game show, the audience will be able to witness the grand set of Ko Banchha Crorepati. Each of the participants in the filming of the show will get to click a photograph with Superstar Rajesh Hamal. The photograph will be provided to you after it’s printed.

How to buy tickets for the LIVE show of Ko Banchha Crorepati from the Khalti app?

2. Tap on the Event icon on the home screen

3. Tap on Ko Banchha Crorepati from the given list of events

4. Tap on Purchase, and choose the type and number(s) of ticket(s)

5.  If you have a coupon for this event, scroll down and tap on “I have a coupon” and enter your coupon code and then tap on Buy

6. Your payment will be successful after you tap on OK. You can now go to the My Tickets menu where you will find the digital copy of the ticket.

You can now attend the filming of the game show on the date and time as specified on your ticket. With a digital ticket on your smartphone, you don’t need to worry about printing the ticket. You can simply show the ticket on your phone at the entry gate where our representatives will scan your ticket.

1. Only visitors holding a valid ticket will be admitted to LIVE Show

2. The time stated for the LIVE show is approximate and subject to change.  If a show is cancelled or rescheduled, we will use reasonable channels to notify ticket holders of the cancellation once we have received the relevant authorization. We do not guarantee that the ticket holder will be informed of such cancellation before the date of the Show.

3. If the shoot is cancelled, ticket holders will be offered seats at the next rescheduled shoot (subject to availability) up to the face value of the ticket.

4. Price and availability of tickets is subject to change without notice.

5. We will not be responsible to make any refund or meet the costs of any alternative travel arrangements or other indirect loss as a result of the LIVE show not running to the precise advertised times.

6. The tickets are not refundable and is redeemable for one-time use only. Hence, Sharing of QR code is strictly forbidden. Once scanned, the code will be invalid.

7. Once on the set, you will not be allowed to leave the set in any condition until the shoot is over.

Don’t have a Khalti account? Create it in two minutes!